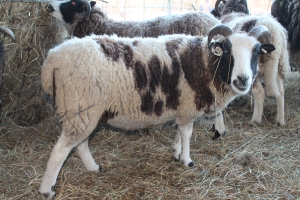 Gabrielle was donated by Bob May to the youth conservationist program that is held at the Maryland Sheep and Wool Festival every year. Each year several rare breeds of ewe lambs are donated by various breeders, these ewe lambs are awarded to the youth whose essays are selected by the breeders. The youth must promise to show the ewe at least twice and to breed the ewe to a registered ram that fall. My essay was selected by Bob May and in 2004 at the Maryland Sheep and Wool Festival I was presented with Gabrielle. Someday, I’d like to return the favor and donate a Jacob ewe back to the program…

While at the festival, I also purchased a ram lamb named Timber (his horns ended up being too forward and was later culled) to keep Gabrielle company on the way home (he also later sired Gabrielle’s first lamb). After the festival, we stayed over for one more night at our friend Ann’s house with the sheep. Ann graciously offered up her home, lawn and shed for us and our sheep, they were quite a sight in the middle of a suburban neighborhood! We didn’t know Ann before the trip, but I’m so glad we met and I look forward to staying with her and her family every year. Ann and my mother were la leche league leaders together and knew each other over the internet, when Ann heard we needed a place to stay near her, she offered. 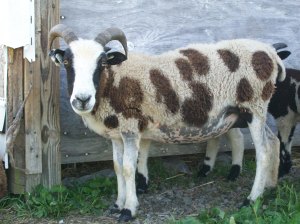 Gabrielle had a large single ram lamb by Timber the following spring – he was an overly large ram lamb with huge horn buds and Gabrielle needed a little help. Since then Gabrielle has had many lambs for me and has proven to be a wonderful mother. She is also a very friendly, easygoing ewe, often one of the first to come say “Hi”. 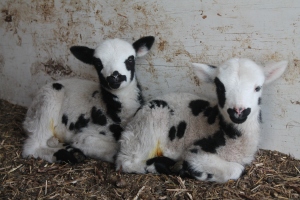 A pair of Gabby’s twins

Her first twin ewe lambs were named Eleanor and Iona, after Ann’s two daughters. Bellow is Iona, one of the twins.

Gabrielle’s body type is more short and squat than you usually see in a primitive type Jacob, but she is an extremely hardy ewe, raising healthy twins on pasture alone while maintaining weight and not needing wormings – in my book that is Jacob-y enough 🙂 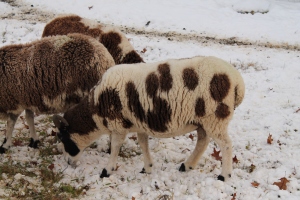 Gabrielle this winter – plump on winter pasture at 10 years old