In late 2005, some Jacob breeder friends (Steve and Trish Barrows at Amazing Grace Farm) offered me a couple of bred ewes. They said that they were down sizing and mainly sold meat animals as it was hard to sell breeding stock in the area, but felt that these two ewes deserved to be in a flock producing breeding stock offspring. These two ewes were Fibre Folds Chortle and Fibre Folds Desiree, and when they came to me they were bred to Barking Rock Cooper.

Chortle, back in the day 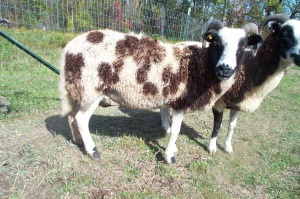 Desiree, with Chortle behind her

Chortle lambed the following spring with a single ram lamb – Andy – who went on to be a flocksire for a local Jacob breeder. Like most of Chortle’s lambs, Andy has her almost smirking face markings.

I’m not sure how Chortle actually got her name, but I like to think its because of the way her face markings make her look like she’s laughing (or chortling!) 🙂

Chortle is an extremely good mother and has had many beautiful lambs for us. I remember one year, when the flock was in the far pasture at the back of our property, I noticed Chortle and her lamb were in the barnyard area grazing the nonexistent grass instead of being out with the flock. Upon further investigation, I found that Chortle’s ram lamb had a broken leg! Chortle had brought him back from pasture to get my attention to help her lamb. I was able to set the leg and he healed beautifully, the vets came out a few weeks after the cast was off and couldn’t guess which was the “broken” leg 🙂 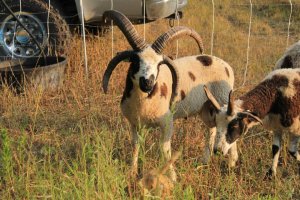 Chortle has produced many beautiful lambs for us, including one lilac ewe, Eibhlin (pronounced Ev-lin). She has quite a few descendants in the flock including two daughters, one granddaughter and three great grand daughters. Chortle has offspring in several other flocks as well.